Clermont-Ferrand has always been a student town… industrial in the last century, it has re-invented itself in recent years to become the creative, connected and moving town in the west of the Auvergne-Rhône-Alpes Region! 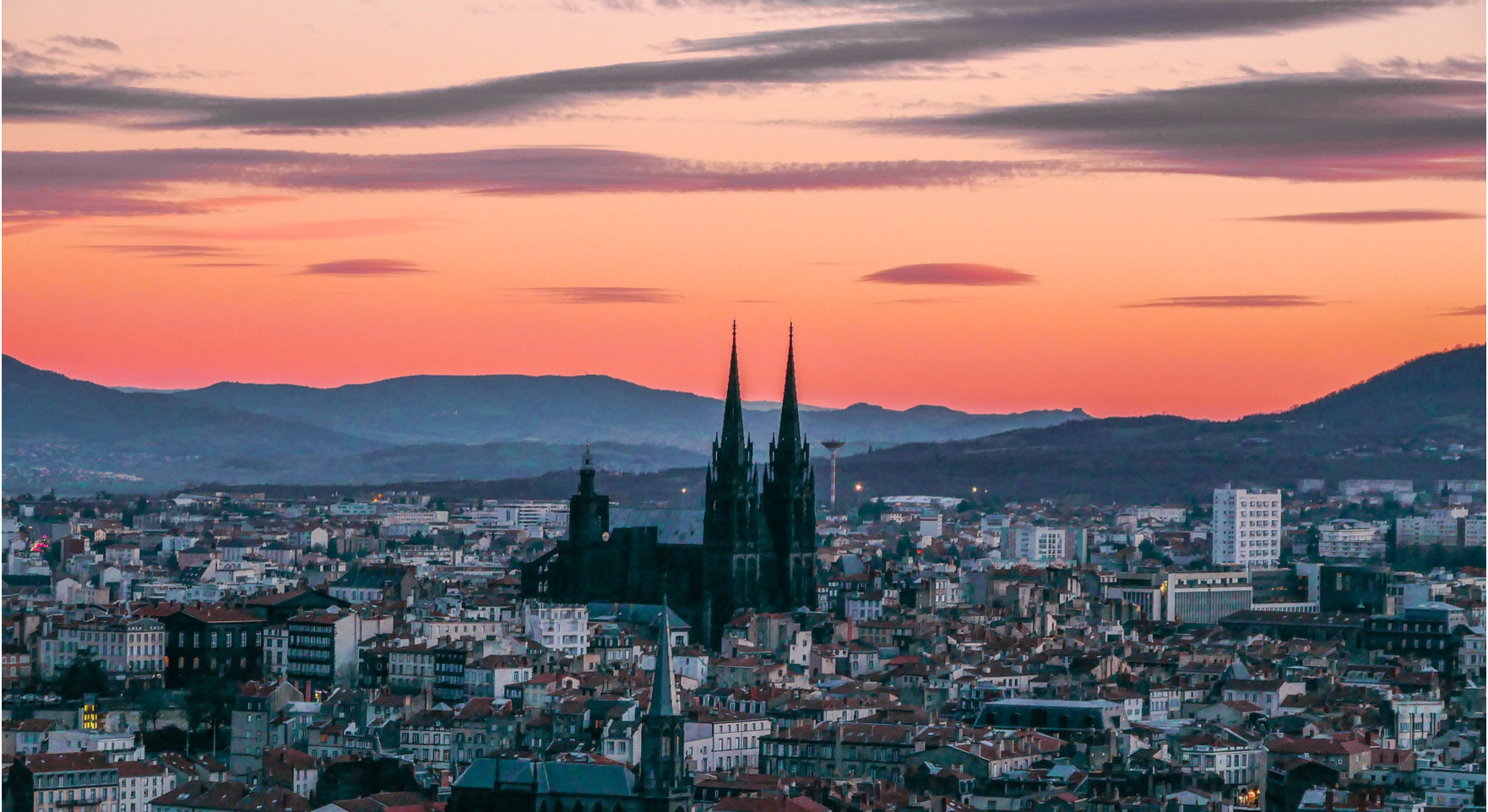 Clermont is a dynamic city and a great place to study with a low cost of living and a high quality of life (International short film festival, international music festivals, theatre, concerts, etc….). The city has an active student population of approximately 40 000 students (around 5,000 are international students) and has witnessed a big increase in its population size during the last few years (+7%) as more people are attracted by the what the city has to offer.

According to the Etudiant ranking of the most pleasant cities in France where to study, Clermont-Fd comes in 3rd position for cities with 30,000 students. Nice score.

One of the undeniable advantages of student life in Clermont-Ferrand is its rather economical cost of living. The cost of housing is among the lowest in the major French student cities (11th out of 46 cities according to UNEF figures in 2017), with a well-supplied housing stock. Students in the city are also entitled to the “Carte cité jeunes” (Youth City Card) which offers significant discounts to take advantage of the local cultural life. And at the start of each academic year the town holds a festival dedicated to “Clermont-Ferrand celebrates its students” for a week to discover all this, which logically goes through the ESC Clermont.

Talking about the region also means talking about its economy. Clermont-Ferrand is the only town in France where a CAC40 company has its headquarters outside Paris, namely Michelin (obviously a partner of the School!). Its industrial ecosystem doesn’t stop at the tyre manufacturer alone since there are also large industrialists such as Constellium… logistics platforms with DB Schenker. There are also other large companies in various fields such as Limagrain, Volvic, the Théa Laboratories, La Montagne… Not to mention the fabric of SMEs and VSEs. As an example, there were no less than sixty micro-breweries in Auvergne in 2020! New technologies are not outdone with groups such as CGI, Almerys and the arrival of a digital district linked to the Clermont Auvergne French Tech. In short, the economic diversity is there. 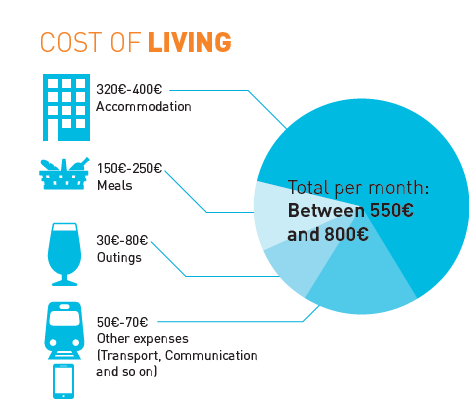 Clermont-Ferrand is one of the most affordable student cities in France. It is much cheaper than other major cities like Paris, Lyon etc..

Living expenses, including rent, food, other bills, can be estimated at approximately 550-800€ per month, depending on a student’s lifestyle and the type of accommodation rented.

During the first month students will need extra money for rent deposits, connecting electricity, gas, telephone and various other extras, especially if she/he will rent her/his own flat. Students are strongly advised to open a bank account as soon as they arrive in France and to deposit/ wire enough money to cover all these initial expenses. 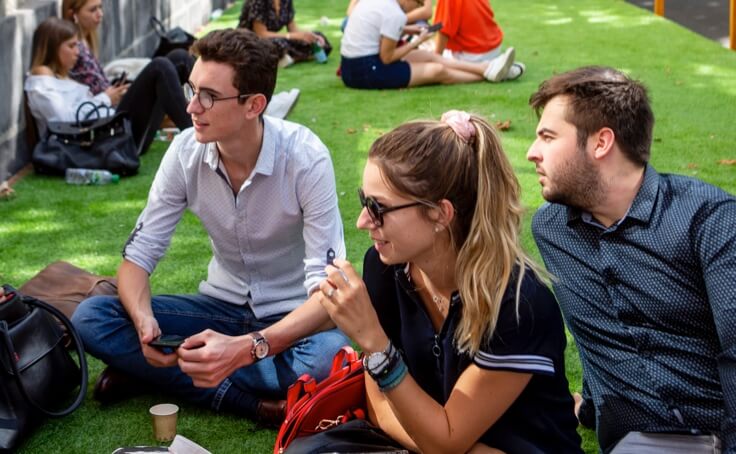 It’s quite common to be surprised by the local cultural life, which one doesn’t imagine as rich and varied when one doesn’t live there. Clermont-Ferrand is a real city of internationally recognised festivals. You have to live, for example, the week of the International Short Film Festival to get the measure of it since it is the 2nd film festival in France in terms of attendance behind the Cannes Film Festival. Clermont-Ferrand is, by the way, a city which offers one of the highest ratios of cinema seats per inhabitants in France, whether you are in the mood for multiplex or arts and essays.

We can also mention Europavox which, for more than 10 years and in conjunction with the Rock en Seine team, has been bringing together musical talents from all over Europe. There are many other emblematic festivals throughout the year: travel diaries, photography, documentaries, video and digital arts, performing arts…

All this is happening at a time when many stages, exhibition halls and museums have their own programmes: The Coopérative de Mai for contemporary music (and its afterworks), the Comédie Scène nationale, the MARQ, the FRAC, the Opera, the Orchestre d’Auvergne…

And, of course, there are the student associations within the School which contribute to this local edifice. 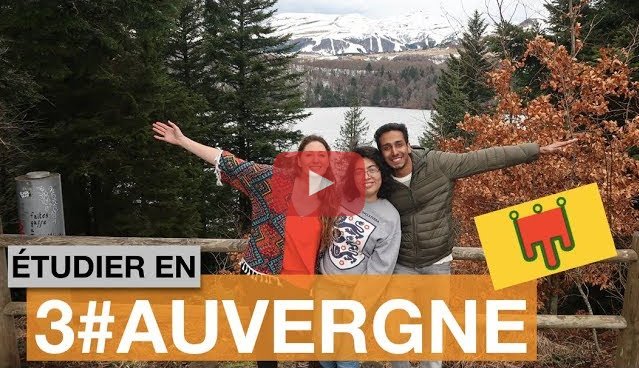 A territory that pleases

Clermont-Ferrand and the Auvergne are a choice tourist destination in the third tourist region of France (behind the Ile de France and Provence Alpes Côte d’Azur)… and not for nothing. Clermont-Ferrand for its part is regularly at the top of the charts of the cities where it is good to live (4th position according to L’Express in 2018).

The charm of Clermont-Ferrand is partly due to its town centre and its “central plateau”. You won’t be able to miss it since the Boulevard Trudaine, where the school is located, is one of its gateways. Populated with bars, restaurants, shops of all kinds as well as two shopping centres, this hyper-centre allows you to live everything on foot (or by bike). Note: as with cinema seats, Clermont-Ferrand has a high ratio of restaurants per inhabitant.

Another major attraction of the city is its sports facilities. Swimming pools, stadiums, ice rink… the city has nearly 70,000 sports licensees in 481 clubs. With, of course, a Sports Office within the School.

In connection with sports activities, leaving the city to be in the middle of nature takes only a few minutes. First of all, there is the Chaîne de Puys – which has just been listed as a UNESCO World Heritage Site – and its emblematic Puy de Dôme. For water lovers you can take advantage of the many lakes that are present there but also the Allier to the east of the town. A little further down, you can enjoy the Sancy mountain range less than an hour’s drive away and its ski resorts, open in winter and summer. Other less touristy areas are as many invitations to discover nature: the Cézallier, the Combrailles… There is a lot to explore in the west of the second Region of France!

Get all the latest news from ESC Clermont Business School by subscribing to our newsletter!

We faced problems while connecting to the server or receiving data from the server. Please wait for a few seconds and try again.

If the problem persists, then check your internet connectivity. If all other sites open fine, then please contact the administrator of this website with the following information.

Some error has occured.